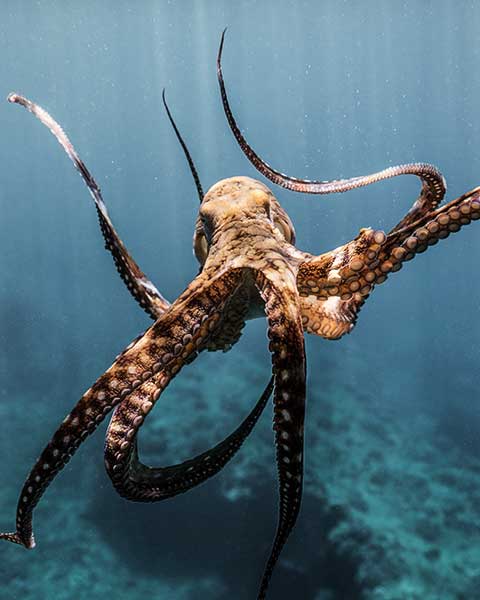 The Octopus amazing features. Many of us have thought it would be nice to be like an Octopus – one head and 8 arms. That way we could get more done at once! They are solitary creatures that depend on their eyes to help them survive in the wild. They aren’t able to hear and they aren’t able to make sounds. This is one of the most fascinating creatures that live in water due to the unique body.

Throughout history, it has been involved with many stories and legends. While there has been quite a bit of research, there remains plenty of mystery about this creature. It does have a skull where the brain is found, but other than that there aren’t any bones in it. It does feature three hearts which is extremely interesting.

There are more than 300 different species of Octopus that have been identified but there may be many more we haven’t evaluated yet. Through observation and research, it is known that they are very intelligent creatures. They are also well known for releasing ink to help them be protected from danger. This ink confuses predators and gives our friend some time to get away in a jet of water or ink:-)

What is an Octopus?

To put it in scientific terms, an octopus is a mollusk. This is a phylum that also includes clams, snails, and slugs. Essentially the slimmest and most internal shell-loving of animals. Within the phylum Mollusca, they belong to the class Cephalopoda which contains the most evolutionarily advanced mollusks. These include the squids and cuttlefish and nautilus.

Cephalopod literally means “head-footed” which accurately describes everyone in the class as having a head that connects directly to their limbs with little space between them.
Cephalopods are thought to have appeared around 600 million years ago and since that time octopuses have managed to evolve into the most complex of them all. The earliest identified octopus fossil is Pohlsepia, which swam the oceans 296 million years ago. 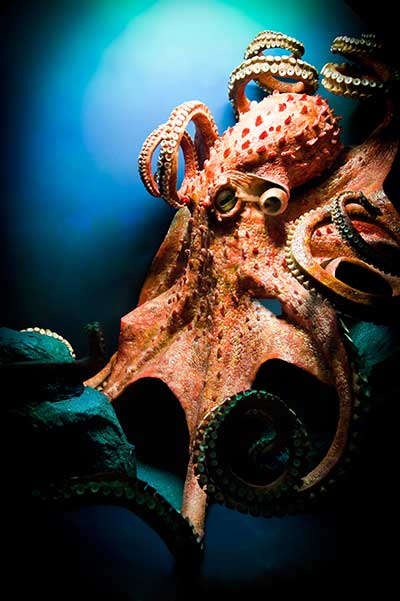 While most cephalopods have some form of an inner or outer shell, the octopus manages just fine without it. Furthermore, others often have arms or other appendages in addition to their tentacles. Instead, the octopus only uses its eight highly developed tentacles lined with suction cups to navigate its world. These iconic tentacles can be used to move, hunt, eat, mate, and even taste.

The different species of octopuses have a wide range of sizes. The Pygmy octopus is as small as 2.5 centimeters and weighs about 1 gram while at least one giant pacific octopus (enteroctopus dofleini) has been recorded as having a 30-foot arm span and weighing 600 pounds.

Octopuses are also invertebrates meaning they have no bones, their bodies made up of and protected by powerful muscle and durable tissue. Moreover, instead of hiding all its organs behind a cage of ribs and a spinal column, the octopus has everything stored in its mantle which is the bulbous, balloon-like part of its head.

Also, within the mantle is the famous funnel or siphon which acts as a pathway for water. It assists in breathing, locomotion, and defense. They are also equipped with a beak that protrudes from their mouth. This is used both as a tooth and as a tool for breaking into clams and mussels.

Speaking of defense, it would be normal to think that a creature with no body bones, or shells, would be capable of surviving long. Nevertheless, an octopus is a formidable if not terrifying opponent to encounter.

First and foremost, they will avoid any danger if they can. The first line of defense is their absolutely incredible camouflage abilities. In less than a second, an octopus can change its appearance on a wide spectrum of colors and textures. In the unlikely event that they are found, they can immediately expel a cloud of ink to distract their opponent.

Furthermore, a compound in the ink called tyrosinase is known to cause smell blindness which can disable a predator’s ability to pursue. After inking, the octopus can use its siphon to shoot off with jet propulsion at 40 km/h – 25 miles per hour and in any direction. Octopuses can also use their camouflage and mimicry to put on threatening displays and even morph into the shape of an animal that would horrify its predators like the Mimic octopus. 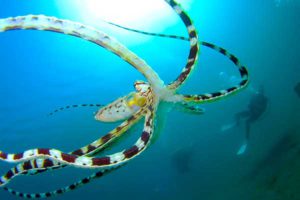 If that wasn’t enough, they can rip off their own limbs and use them as a distraction before escaping and regenerating. If all else fails, they are formidable wrestlers with extremely strong limbs. The muscles have been known to grapple with sharks and even break plexiglass.

Beneath all that is a powerful mouth and beak that can inject venom when needed. As an added and truly epic bonus, the male Pillow octopus has been observed ripping off the poisonous tentacle of a Portuguese man-of-war jellyfish and using it as a sword against attackers, kinda cool right?

The Octopus amazing features – How Do Octopuses Work?

To go a little deeper, it’s worth understanding some of the more amazing features of how octopuses actually function. Let’s begin with the heart, or in the octopuses’ case, hearts. They have three. One heart circulates blood around the body while two extras work to pump oxygen-rich blood through the gills. Octopuses need these hearts because its blood is less efficient at carrying oxygen.

They help to keep blood pressure up and oxygen flowing. Even stranger, an octopus has blue blood. The blood contains hemocyanin which contains copper and binds oxygen to keep the octopus alive. The copper-rich hemocyanin appears blue while our iron-rich hemoglobin turns our blood red.

As previously stated, an octopus’ vital organs are all contained in its mantle. It has a brain that is comparable in size to birds and mammals and frequently demonstrates a high compacity for organization, intelligence, and even personality.

That said most of an octopus’ nerves are found in its tentacles. As such, research is showing that while the brain may give out orders, each tentacle has its own separate nervous system that can decide on the specifics of how to complete an allotted task. This is incredibly efficient because it means the brain can delegate to the limbs and then focus on something else.

An octopus’ eye is no less complex. Like a human’s, it has a pupil, retina, iris, and lens. Their eyes are so advanced that they are superb at spotting prey and can reach out and grab with amazing accuracy. The lens of an Octopus’ eye has 8 layers of varying densities that help to bend and focus light dynamically. This gives it its superb depth perception. Their eyes focus so well and efficiently that many modern camera lenses are modeled after their structure. 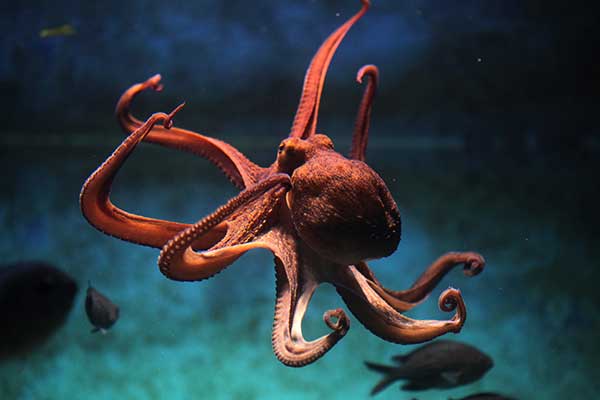 The ability for near-perfect camouflage is also due to the amazing bodily anatomy of the octopus. In order to change color and texture, the octopus utilizes chromatophores, which are tiny pigmentated cells containing sacs of various colors.

There are tens of thousands of these cells spread out across the body of the octopus. As it flexes and relaxes its muscles, the octopus changes the pigments of the chromatophores to fit its surroundings.

Every single chromatophore can be individually controlled and activated in less than a second. This gives the octopus almost infinite possibilities for camouflage. In addition to the chromatophores, Octopuses also have iridophores which add a level of nuance to the camouflage by reflecting the colors and textures of their surroundings.

To add even more to texture, tiny projections called papillae are spread across the skin and heighten the ability to blend with course materials like coral and sand.

When it is time to mate, octopuses undergo a brutal and tragic ritual. First, a male octopus finds a mate. The female octopus is around 100x its size. This is the equivalent of a beetle dating an adult woman. A male octopus has an arm called the hectocotylus which is lined with pockets of sperm. When it has found its giant love, it either rips the hectocotylus off and hands it over for later use or inserts it into her oviduct. After this, the male will wander off to end his short life. The female then finds a safe space to lay her eggs.

If she is carrying the hectocotylus, she will wave it over eggs like a wand and fertilize them. For anywhere between 2 to 10 months, the female will guard, clean, and care for her eggs without eating. Once the eggs hatch, their mother soon dies, and they are left on their own. While very little is known about the early life of an octopus, it is estimated that a baby giant Pacific octopus has a 1% survival rate from hatchling to ten millimeters. If they do survive, they can expect an average life span of 3 to 5 years, growing at about 5% of their body weight each day.

Read Or Listen To The Article Click Here.Octopus Defenses

Few animals on the planet are as iconic or as fascinating as the octopus. Since the beginning, they have occupied every facet of our lives in some form or another. In myth, their strength and intelligence represented our greatest fears of the unknown depths of the sea. They are ubiquitous in our culture as symbols of everything from the beauty of the ocean, villainy, conspiracy, and even erotica. In science, they are marvels in the structure of their bodies and the potent activity of their brains.

Their distinct personalities and forms of expression amazes and inspires researchers. An Octopus by the name of Otto actively communicated boredom by juggling hermit crabs, throwing rocks and rearranging the decorations of his tank.

When he was truly upset, he learned to squirt water out of his tank and onto to the aquarium lights which would then short-circuit the lighting of the entire building. At Millersville University, an octopus expressed her discontent with the quality of her meals by waiting for the researcher to return to the room. When they did, she would make direct eye contact while shoving her stale food down the drain.

There are many examples of octopuses escaping their tank.

It is perhaps those stories that should amaze us the most. Octopuses are more than just another animal to be studied, they are true individuals who learn and are able to communicate with us. Gone are the days when we might live in terror of a suckered tentacle pulling us under the sea. Today, the octopus is a species we can not only learn from but can connect within a beautiful and profound way.

Read Or Listen To The Article Click Here.Octopus Anatomy

Do you want to know more about different octopus species?

Mimic Octopus Read Or Listen To The Article Click Here.

Seven-Arm Octopus Read Or Listen To The Article Click Here.


Rate and Share your favorite Octopus video or story.

28 thoughts on “The Octopus Amazing Features”