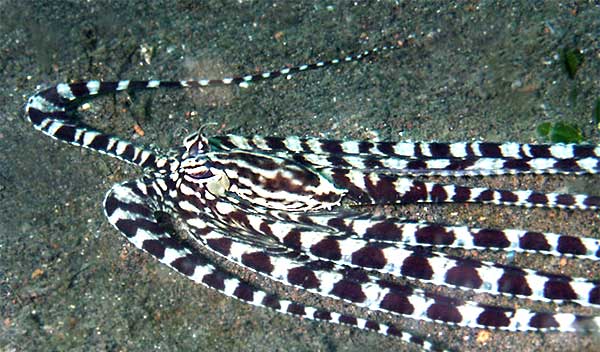 Where Does The Mimic Octopus Live?

HABITAT –
Southeast Asia. Along the coast of Sulawesi. You will have the best chances to find them in Alor, Bali Ambon, Lembeh – Indonesia, Anilao, Dumaguete – Philippines)and Mabul Malaysia in shallow areas.

How Does The Mimic Octopus Protect Themselves?

DEFENSE –
By wisely selecting an animal to mimic so the predator around it, won’t bother.

How Many Different Animals Can Mimic Octopus Imitate?

REPORTED IMITATIONS:
About 15 and probably more, here are some examples.

What Is The Mimic Octopus Scientific Name And Classification?

What is the mimic octopus? Description

The name for the Mimic Octopus comes from the fact that they often copy the behaviors of other types of animals in the water. They do this in order to trick predators into leaving them alone.

They aren’t very large Octopus with an overall length of two feet when they are fully grown. They have a normal coloring that spans many spans of brown and white. They also have stripes and spots on them that help to blend into their surroundings. Like other types of Octopus, they can change the colors of their bodies to blend in when they need to. The changes in their environment are what will trigger those changes.

Where are the Mimic Octopus distributed?

The Mimic Octopus is found in the area of South East Asia. Along the coast of Sulawesi is where most of them are located. This is a fairly new type of species that was identified in 1998. It is believed that there could be other habitat locations for them that simply haven’t been found yet. They seem to prefer warmer waters and muddy locations out there.

Check out video number 10 about The Mimic Octopus after reading or listening to the article.

The Mimic Octopus is fascinating to watch due to the fact that they do act like many other animals. For example, they may move along in the water mimicking the movements of an eel. They have been observed mimicking plenty of other animals too though including stingrays, jellyfish, and starfish. Not only do they copy the movements but they also turn their bodies to those colors so that they will fit the description well.

They are extremely intelligent and researchers believe they choose an animal to mimic based upon the types of predators that are in the area. They have a great memory so they already have seen what is consuming what in their environment. By selecting an animal to mimic that predators around won’t bother the ensure their own survival.

They are one of the few species of Octopus that make tunnels and burrows under the sand at the bottom of the water. They are able to move along this way protected from various predators. At the same time, they are able to sneak up on their own prey and take them down without a battle.

Octopus Senses Read Or Listen To The Article Click Here.

The location where these Octopus live are full of food sources for them to feed upon. That is why they commonly are seen around the bays of Malaysia. The main elements of their diet consist of worms, crabs, and small species of fish. They are also well known for taking part in cannibalism.

What is interesting about that though is that they will feed on each other when other food sources are around. Experts believe the cannibalistic acts have nothing to do with survival. Instead, they are about maintaining control over a given area of territory.

Their ability to mimic other animals also helps it to gain access to prey. For example, by imitating a crab in color and movement other crabs aren’t going to be afraid to be around it. Then when they get close they get consumed without having a clue what was taking place.

Octopus Species – Read Or Listen To The Article Click Here.

Scientists have recognized more than 300 Octopus species. They live in the oceans around the world. They are only found in salt water and they can live in regions that are either warm or cold. They range in size from extremely small to quite large. There is plenty of misunderstanding out there about these animals.

This Octopus has a reproduction process where the male places a sack of sperm inside of the mantle of the female. The male will die within a few months of this process taking place. The female will carry that sperm sac for several months until her eggs are ready to be laid.

As she lays strings of them she will use the sperm to fertilize them. She will keep the strings of eggs tucked protectively under one of her arms. Her suckers will prevent them from falling into the water as she moves around. As the eggs are ready to hatch she too will die. The young Mimic Octopus will have to fend for themselves from the instant they hatch. They will try to survive at the top of the water to find enough food.