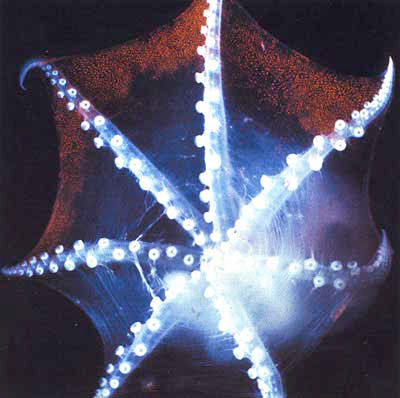 What makes the Seven-Arm Octopus stand out from the other 300 species is that it has one less arm than they all do. Well, that is how it appears anyway. They actually do have eight arms but one of them is extremely hard to notice. It is formed into a type of sac that is below the eyes. What is also known is that this look of seven arms is only for the males.

It is a very large species as well so it definitely gets quite a bit of recognition from both researchers and common people with an interest in these creatures. They can grow to a size of about 13 feet and weigh about 150 pounds. There is no size difference between males and females.

This particular species of Octopus wasn’t identified until 2002. It was accidentally captured around the area of New Zealand. Researchers quickly took to the area to see what they could find out about them.

This particular species of Octopus continues to follow suit with so many other species. It is highly intelligent with an ability to easily adapt to the environment. They are able to hide in cracks and crevices due to the flexibility of their bodies. They are also able to change colors to blend into their surroundings. They can do this by controlling their pigment.

They consume a variety of different foods including fish, mollusks, and crustaceans. They tend to be opportunistic feeders instead of very picky as many other species of Octopus are. They have a very strong beak so they can almost always break through the shell of any food they capture.

When they aren’t able to they will drill holes in it and suck out the food source. As they attempt to capture their prey they can immediately immobilize them by biting them. This releases a very powerful venom into the body of their prey. These Octopuses do consume large amounts of food. They hunt at night and are able to sneak up on their prey due to blending in. They have remarkable eyesight so they have no trouble at all seeing in the waters.

When it is time for mating, the males will come into contact with females. It isn’t uncommon for the males to mate with several different females during a given season. The males will soon die after the mating season is over. This is due to a mechanism in their bodies that will shut it down after they are done creating sperm and depositing it into the body cavities of the females.

The females will carry the sperm with them for about four weeks before the eggs are ready to be fertilized by it. They can lay several thousand eggs at one time. They will find a place in the coral reef or in crevices to be able to deposit those eggs. The females stay very close to protect them from predators. They also keep them clean by blowing water on them and creating bubbles.

By the time that the eggs are ready to hatch the female is exhausted. She hasn’t eaten for a very long time and she is close to death. She won’t live long enough to see all of her eggs hatched. The young are able to swim and to find food on their own. They are vulnerable though and that is why the mortality rate is extremely high.

Sometimes this particular species of Octopus ends up tangled in the commercial fishing nets out there. It is believed they are following the sources of food in the water then this occurs. Many commercial fishermen are upset by the presence of this particular creature as it can result in lower yields of capture for them.