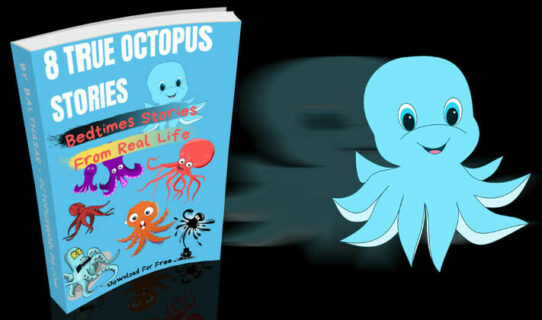 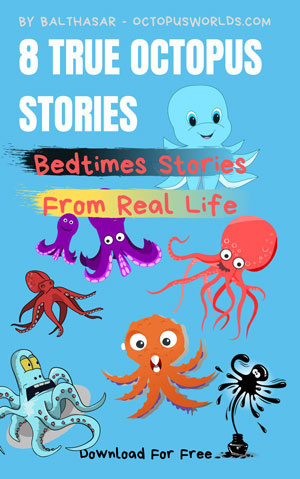 True Octopus Bedtime Stories From Around The World

Here are some interesting true stories about octopuses.

One Bad Shrimp Spoils The Bunch

One day, at feeding time, an octopus’ owner fed him his usual tasty treat of a bucket of shrimp. The octopus always seemed to enjoy this meal. The man dumped the shrimp in the octopus’ tank and walked down a hall into another room and sat down. The only problem was, one of the shrimps was bad. Octopuses smell their food with the suckers on their arms, and when the octopus detected the bad shrimp, he climbed up and out of the tank with the shrimp in tow. Then he crawled all the way down the hall and into the room where his owner was. He took the shrimp up in one of his arms and threw the bad shrimp onto the owner’s desk. Then he crawled back down the hall and back into his tank. The octopus felt the need to send a message to its owner. He knew where the shrimp came from and stamped this one “return to sender”. The octopus knew he could escape at any time, but he didn’t want to miss his next delicious shrimp meal.

Octopuses can squeeze out of the smallest openings by changing the shape of their bodies. Even a large octopus can squish himself down to a fraction of his normal size and shape. Most times, octopuses that escape are just curious and want to see what’s outside the tank. At one aquarium, workers kept noticing that the fish that were in another tank was disappearing during the night. The workers searched high and low but could not find where the fish had disappeared to. This octopus made it a game to escape his tank, crawl over to the other tanks that held the fish, and eat them. He observed the workers every night checking on all the sea creatures. He would wait for the workers to finish and leave the aquarium. Then he would spring into action. He crawled across the floor to the fish tank and grabbed himself a fishy snack. Then he would crawl back into his tank and close the lid before anyone was the wiser. It took the workers many days to figure out what was happening to all the fish. Eventually, the workers had to tape his tank shut to keep him from escaping and eating all the other sea creatures!

Octopuses can have quite a personality. In the wild, they usually live alone, but they are often intrigued by human visitors. They like to put on a show for anyone that is watching. One time, an artist visited an aquarium to draw beautiful pictures of octopuses. The artist sat at one tank and began to draw a baby pacific red octopus. At first, the young octopus sat quietly while the artist sketched his picture. After a while, the octopus moved to the front of the tank right in front of the artist and sat very still. The octopus knew the artist was observing him and obliged by coming out into the open and lying still. Then, the octopus started moving his arms around in different, graceful poses. He would straighten his arms out and then slowly curl them up in different ways. He would turn left, turn right and stop. He seemed to dance around his tank so as to give the artist plenty to draw. He would even stand as straight as a statue so the artist could draw him.

When You Can’t Go To The Ocean, Bring The Ocean To You

Octopuses can be very handy. They build and decorate their own dens out of seashells. They even make a door that they can close behind them to keep predators out. They have made tools out of shells and coconuts. At the Santa Monica Pier Aquarium in California, one tiny octopus made a daring escape attempt. This octopus was tired of her small tank and missed her days floating happily along the ocean floor. She decided she wanted to make the entire aquarium into one big ocean for all the sea creatures at the aquarium to enjoy. She crawled out of her tank and discovered a pipe that fed water into the tank. There was a lever on the pipe that controlled how much water flowed out. The octopus crawled up the pipe, turned the lever, and dumped hundreds of gallons of water into the aquarium. The octopus loved swimming around in her own tiny ocean. She wasn’t trying to get away, she just wanted to have some fun.

When octopuses get bored they find fascinating ways to entertain themselves. In Germany, an octopus named Otto taught himself how to squirt water out of his mouth and outside of his tank. He would inhale a large amount of water and then breathe it out in a fast stream. Otto began using his new-found talent to squirt a light above his tank disable the lights in the whole aquarium. When the aquarium is closed, Otto has discovered a lot of other fun games to keep him occupied. He likes to juggle the other small creatures that live in his tank, toss the rocks from the bottom of his tank around, and even remodeling his tank by changing the place of his belongings.

Read Or Listen To The Article Click Here.Humans and Octopuses

Octopuses don’t have big claws or sharp teeth to defend themselves. That’s why they’ve learned to be crafty to survive in the wild. They have also learned to communicate in ways with people. A captive octopus from the east coast had a picky appetite. She wanted fresh fish for her meals but the caretakers only fed her canned fish. So, one day during feeding, as the caretaker looked on, the octopus looked right at him and pushed all the canned fish down the drain. The octopus learned how to tell its caretaker that she wasn’t satisfied with the meals provided. She wanted fresh fish and used this smart way to tell the people feeding her.

Octopuses are famous for their elaborate escape attempts. They will push open the lid on their tank, squeeze through a tiny opening and even hide in tiny spaces from their handlers. They don’t have any bones so they can squish themselves into almost any shape. An octopus from New Zealand, named Sid, had escaped so many times from his tank that the handlers had to seal his tank with rope to keep him inside. Another octopus from the same tank escaped and crawled all the way to a nearby set of stairs before returning to his tank. That earned him the nickname Harry Houdini. The only way the handlers knew was the wet spots on the stairs the next morning. One time, Sid camouflaged himself inside of a pipe for many days to avoid detection. Just when the handlers gave up looking for him he tried another daring escape. The aquarium owner finally gave up trying to hold Sid captive and released him back into the ocean.

Read Or Listen To The Article Click Here Mimic Octopus

Octopuses breathe by sucking water in and out of their mouths. They can also shoot water out to help them swim very quickly. Some octopuses have learned how to spray water like a squirt gun. An Octopus from England was given the nickname Squirt because he thought it was very funny to squirt water at everyone who passes by his tank. Octopuses can learn to recognize different people’s faces. Squirt has become famous because he even squirts visitors to the aquarium. Now everyone that visits hopes Squirt will squirt them.

So, as you can see, octopuses are smarter than they may appear. Scientists say that they are one of the smartest creatures in the ocean. They do many of the things that you and I do: They learn new things, remember old things, entertain themselves and others, and decorate their homes. Octopuses get bored when there’s nothing to do. They are very curious and will do almost anything to explore their surroundings. Next time you’re at an aquarium, pay attention to the octopuses and maybe you’ll discover a true octopus story of your very own!