Octopus and Types of Predators

There are quite a few different types of predators out there that find Octopus to be the perfect meal. The location of the Octopus will affect the types of predators it has to contend with. The species of Octopus also affect it due to the different sizes of these animals.

Some of the most common predators include large fish, birds, and some types of whales. In some areas they have to worry about eels and dolphins. It seems that when the normal food sources for these types of animals are hard to find they will become more dependent upon the Octopus. With the reduction in the number of sharks and dolphins remaining those predators have become less of a problem for the Octopus.

More than 2/3 of all the offspring will become food within the first couple of weeks of their young lives. They are living at the surface of the water and that makes them extremely vulnerable. While more than 200,000 young can be hatched, a single predator can consume hundreds or thousands of them in a matter of minutes. The low survival rate is why there is so many young borns.

The larger Octopus will put up quite a fight for their survival with these types of predators. That is why they will often be left alone unless there is really nothing else for these predators to consume. They don’t want to risk being in a confrontation with an Octopus. They can bite too which can release a powerful venom from their bodies. In fact, that is what they release to be able to consume their own prey.

The Octopus is one creature with an instinct to run when they feel they are in danger. They have a body that is able to fit into small spaces which makes it easier for them to hide when they need to. They can often get away from a predator by moving very quickly into one of these small areas. The predator generally won’t sit around and wait for them to come back out. Instead, they will continue on their way trying to find other sources of food that are easier for them to grab.

Blue-Ringed Octopus – Read Or Listen To The Article Click Here.

The fact that they can release ink from their bodies is their other line of defense. This ink gives them time to get away from predators while they are trying to re-orient themselves. They have a gland that created ink and then they can release it instinctively when they feel stress. Sometimes predators can get too close though before they are able to release the ink and then it doesn’t protect them.

They also have the unique ability to change their body colors for camouflage, very similar to what the Chameleon can do. With this process, they can go a step further by mimicking other animals in the water. They may try to act like an Eel, Lion Fish, or Sea Snake. It can be very comical to see them behave in such a fashion. Yet doing so has worked wonders for them in the water. It has allowed them to be left alone instead of a predator trying to eat them.

Even with all of these efforts though, there are plenty of times when the Octopus is just too slow for them to survive. They also don’t have the ability to hear so if they aren’t seeing a predator come their way it can be over before they know it. There has been plenty of observing the Octopus in their natural setting to see the balance of things and how predators are able to take control of them in a matter of seconds.

Leave a comment or a link to your favorite Octopus video or story.
Read More » 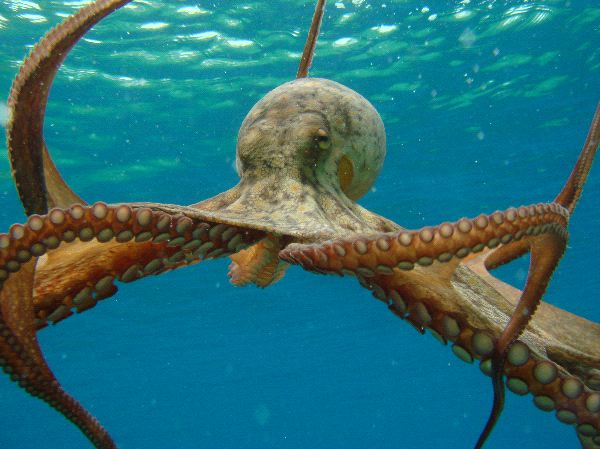 The Octopus has an amazing body design. They are able to defend themselves in a variety of ways. The most common is flight since they can use jet propulsion to quickly move through the water. Their flexible body has no bones so they can escape into small cracks, rocks, crevices, and even into bottles and cans that have found their way into the bottom of the water.

The bite from an Octopus has a very powerful venom in it. This is how they are able to paralyze their prey while they consume them. This venom is generally not harmful to humans. There are only one species that has a powerful enough venom to kill a person. That is the Blue Ring Octopus. Actually, it can kill 26 full-grown men, in minutes.

For the Mimic Octopus, their defense mechanisms goes even further than that. It allows them to take on the coloring and the design of about 15 different types of animals. They will move in the water acting like eels, starfish, and more in order to stay away from predators. They will use this defense to also allow them to get very close to the food they wish to consume. In such a form they aren’t viewed as a threat until it is too late.